Footballers and football actors in the North West region particularly Elite teams will have something to fight for when play resumes. Being a diehard supporter and promoter of soccer in the region, renowned North West Elite Fongod Edwin Nuvaga has launched a Fongod’s Man Of The Match initiative.

The award was conceived to promote the game of football in the North West region, encourage and reward talent and bring visibility to actors who excel during home matches in metropolitan Bamenda. This involves teams such as PWD Social Football Club of Bamenda, Yong Sports
Academy FC in the Elite One, Foncha Street FC, and Rangers FC of Bafut in the Elite Two championships.

Fongod’s Man Of the match initiative shall recognize and reward, either the best player, Coach, Match official, or supporters during home games. The awardees shall be chosen by a group of journalists (Choves Loh who serves as Manager of the project, Arnaud Kuamo, Martial G., and Clenice Ayombom) who shall after each home game reward 10,000 FCFA to Elite One and 5,000 FCFA to Elite Two.

This is coming months after officials of FECAFOOT North West started by giving the Man of the Match Award to outstanding players of the Regional Mini interpools.

Appreciating the gesture, North West FECAFOOT Secretary General Ndi Tsembom Elvis thanked the donor and also call on him and other elite of the region to see that the largess is extended to regional league clubs who have little or no stipend and to boost their morale while promoting the talents they carry. 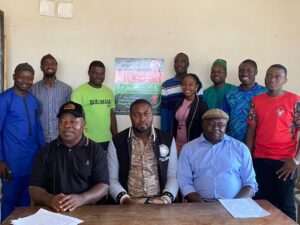 This way will kickstart when the 2022/2023 football season resumes after the World Cup and Christmas break.