The Al Janoub Stadium in Qatar will host Cameroon’s second group G match in the ongoing FIFA World Cup as the Indomitable lions for redemption against Serbia.

With bookmakers giving the indomitable lions of Cameroon just a 19% win probability, Coach Rigobert Song and his troops will have to put in a spectacle against Serbia if they want to keep their second-round hopes alive.

Serbia on their part is aware that defeat will mean a premature end to their world cup ambitions.

Cameroon and Serbia have met just once and Monday’s encounter will be just the second time both teams will be meeting.

On June 5, 2010, Serbia defeated Cameroon 4#3 in an international friendly. On that day, Pierre Webo scored a brace while Eric Maxim Choupo Moting got the other goal for Cameroon.

On that day, Cameroon’s current coach and Manager, Rigobert Song started on the bench while players like Choupo Moting, Vincent Abubakar, and Nicolas Nkoulou are still part of Cameroon’s squad today.

Cameroon has failed to record any wins in their last five matches.

They have picked up three defeats and two draws and are currently on a run of 8 world cup defeats. 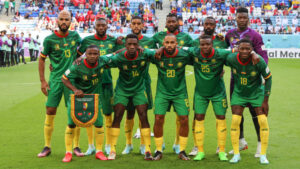 For Serbia, they have picked up three wins, one draw, and a defeat in their last five matches.

Cameroon’s Bryan Mbeumo will be one of the players to watch out for. The Brentford attacker was a peripheral figure against Switzerland, contributing just one shot on target and three touches inside the opposition box.

This would be the ideal moment for Mbeumo to score his first international goal, as Cameroon is averaging just 0.8 goals per game at the World Cup (18 goals in 24 games), the lowest ratio of any nation to play at least 20 games in the tournament.

Serbia’s Dusan Vlahovic was reduced to a substitute against Brazil with coach Dragan Stojkovic adopting a more cautious approach.

The Juventus forward Vlahovic is likely to start against Cameroon with Serbia needing to win.

Vlahovic has been a rare bright spark for Juve this season, scoring six goals in 10 Serie A appearances, and will form a physical strike force with Aleksandar Mitrovic.

The match arguably gives both Cameroon and Serbia their best chances of opening their account in Qatar.

But a loss for either team – combined with a draw between Brazil and Switzerland – would prematurely bring the curtains down on their campaign, with nothing to play for but pride in their final group game on Dec. 2.

On the other hand, Serbia has a well-drilled unit that prevented Brazil from making inroads in the first half before they occurred carved open in the second following a drop in intensity.

Serbia is bottom of the group after losing 2#0 to pre-tournament favorites Brazil while Cameroon’s 1#0 loss to Switzerland means the African sides still seeking their first victory in the World Cup since 2002.