Rwandan referee Salima Rhadia Mukansangamade history on Tuesday by becoming the first African woman to handle a World Cup game in its 92-year history after the 34-year-old was the fourth official with defending champions France faced Australia.

France defeated Australia 4-1 at the Al Janoub Stadium in Al-Wakrah, with Olivier Giroud scoring a brace and one goal each from Rabiot and Mbappe, with the French side getting off to a winning campaign.

Salima Rhadia, a seasoned who has officiated at the Olympics, FIFA Women’s World Cup, CAF Women’s AFCON, and CAF Women’s Champions League became the first women referee to officiate at the 2022 TotalEnergies AFCON in January.

Her first assignment was the Group B encounter between Zimbabwe and Guinea with the Warriors claiming a 2-1 victory over the Syli Nationale at the Yaounde Ahmadou Ahidjo Stadium.

Born in 1998, and raised in Rusizi District, West Province, in Rwanda according to Rwanda’s New Times, her ambition while young was to become a basketball player, but that was not the case as she lacked a lot of basic needs including basketball facilities.

“I liked basketball, and wanted to take it very seriously, but access to basketball facilities and coaches was hard. That’s how I ended up refereeing, which I have also never regretted. I love it,” Mukansanga told New Times during an interview in 2019.

In 2004, Salima Mukansanga was assigned the centre referee, her first time taking up the role during the CAF African Women’s Championship battle between Zambia and Tanzania. And she then, she has been amongst the top women referees on the continent.

“It is because of how I handled that match that I proved my ability to lead matches at any level on the continent. It was an exciting experience. Since that day, I have been trusted to officiate countless international matches in Africa and beyond,” she told New Times as quoted by Goal. 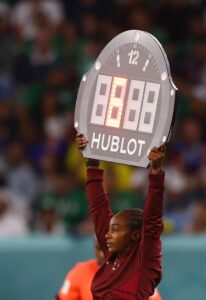 The reactions from fans and pundits have been pouring in. Usher Komugisha, an award-winning Football journalist said Salima’s exploits should be a drive to other women out there. She tweeted: “Dear African woman, hang this photo in your living room and tell your daughter, sister and friends that impossible is nothing. Super congratulations on becoming the first African female referee to officiate at the FIFA World Cup in 92 years. Very proud of you.”

“You all probably don’t understand that this right there is the biggest ever football competition, the biggest audience in the world. Salima Rhadia being here is a once-in-a-lifetime thing. Made us proud. There are no limits to a determined soul,” Erison Nshuti tweeted with a photo of the four officiating referees with Salima amongst them.

The Rwanda Football Administration tweeted two photos with the words: “Our very own Salima Rhadia, the fourth official of the France v Australia at the ongoing World Cup.”

Qatar 2022 WC : Atlas lions get a merited draw against Croatia