Current champions France started their World Cup campaign in a beautiful style, with their 4-1 defeat of Australia. Thanks to Rabiot, Giroud’s brace and Mbappe on November 23,2022 at the Al Janoub Stadium.

After debuting the game on a slow pace and letting go an early goal at the 9th minute for Australia via Goodwin.

Australia created a litany of goal chances, but Les Bleu dominated possession and executed 23 shots on the Australia cage.

France hastened things up , with a 27th minute leveler from Rabiot via a lovely header of the ball thanks to Theo Hernandez’s well curved ball cross. 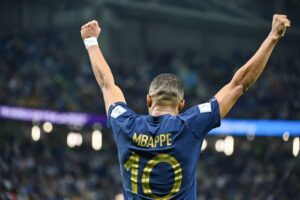 Giroud later on took the lead five minutes afterwards, by placing a distant shot at the 32nd minutes to put France on 2-1.

The boys of Didier Deschamps used 20 minutes in the second segment of the game, to fire the lead goals at the 68th minutes by Killian Mbappe and Olivier Giroud at the 71st minutes.

Killian Mbappe had 19 ball touches in the opposition’s box against Australia, the highest by a player in a World Cup game since the 1970 edition.

France dominated with the following statistics;

All rights reserved. This material and any other digital content on this platform may not be reproduced, published, broadcasted, written in full or in parts, without a written permission from our management.