The Atlas Lions will face Les Bleus at 8 pm as another beat of history is on the side for the North Africans. Morocco has already created history by becoming the first African side to the semifinal of the FIFA World Cup after beating Portugal and will look to do another upset against defending champions France.

Morocco will be the 25th different nation to play in a World Cup semi-final and the first from Africa. The last team to make their debut at this stage was Spain in 2010, who beat Germany 1-0 to reach the final.

The Atlas Lions have kept four clean sheets at this tournament – the last two sides to record five shutouts at a single FIFA World Cup (Spain in 2010 and Italy in 2006) lifted the trophy.

France is tipped as the favourites but it will take some manpower for them to topple a Moroccan defence that is yet to concede a goal from an opponent. The only goal conceded by Morocco in all their encounters was their own goal.

About 20,000 Morocco fans are expected to be at the Al Bayt Stadium for the match.

According to BBC Sports Africa, Dayot Upamecano and midfielder Adrien Rabiot are a doubt for the game. Upamecano could be replaced by Ibrahima Konate if not fully fit.

Walid Cheddira is banned from Morocco after his red card against Portugal. Their key fitness concerns are Nayef Aguerd, who missed the win against the Portuguese with a thigh injury, and fellow centre-back Romain Saiss, who was forced off in that game with a similar issue. Full-back Noussair Mazraoui was unavailable for the last match, reportedly through illness and hip pain, but may come back into contention. 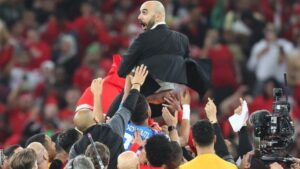 Appointed in August this year following the sacking of Hillidhodzi, Walid has achieved greatness which many African coaches are still looking at attaining. Having become the first African coach to lead his side to the semifinal of the FIFA World Cup, coach Walid is looking at the final.

“Why not reach the final of the World Cup? We will show great desire and try to pull off an upset,” said Regragui. “We’ve come to this competition to change mindsets within our continent.”

Morocco has already produced major shocks in the tournament having beaten Belgium, Spain and Portugal on their way to the last four in Qatar. Is France the next “victim” to fall on the feet of the Atlas Lions?

“Before every match, people thought we would get knocked out, but we’re still here,” added Regragui, who only took charge of the side in August. “We’re getting closer to our dreams and we’ll fight to get there. If we say the semi-final is enough, I don’t agree. We aren’t satisfied with the semi-final and being the first African team to do that. We want to go further.

“You might think that’s crazy, but a bit of craziness is good. We’re hungry. I don’t know if it will be enough, but we want Africa to be on top of the world. I know we’re not favourites but we’re confident.”

Whatever the outcome of the game tonight, coach Walid and his boys will be proud of themselves for having written their names in the national and continental folklore. But the end is not on their agenda as they are looking at lifting the trophy, something no African country has done, yet.