The Mourabitounes will be making only their third appearance at the Africa Nations Championship and will be hoping that the Algerian expedition is more joyous than their 2014 and 2018 editions.

Road to the final

Mauritania was exempted from the first round of the preliminary round of the qualifiers of the 2022 African Nations Championship and joined in the second round. The team beat Guinea-Bissau with identical 1-0 scorelines home and away in the final match. However, they know only too well that to compete with the best in the continent, they need to raise their levels in Group D with the ambition of making it into the next round. 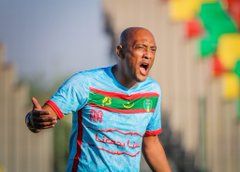 Coach Amir Abdou is a household name in Mauritanian football, having coached FC Nouadhibou for a long time, simultaneously with being the coach of Comoros in the past. His exposure with Comoros saw him appointed as the head coach of Mauritania.

The 50-year-old’s style of a balanced offensive-defensive approach has already earned him results and will look towards the same strengths when he leads the team in Algeria.

“We need to put together a more competitive team and it is planned to have friendly matches to prepare for the CHAN (African Nations Championship) qualifiers,” Coach Amir Abdou said. The side will meet Ivory Coast on January 9 for a friendly encounter in their first game.

Mauritania will be making its third appearance in Algeria having made its competition debut back in 2014 under French coach Patrice Neveu. The team failed to win any of their group stage matches and was then eliminated from the group stages.

Mauritania failed to qualify for the 2016 edition but wrote the wrongs and qualified for the 2018 edition in Morocco. Like their first appearance two years before, the Mourabitounes failed once more to escape the group stage.

Mauritania is in Group D and will begin its CHAN expedition with a tough test against Angola on January 20 at the Miloud Hadefi Stadium, Oran. The side will then take on Mali at the same venue on January 24.

Hemeya Tanji will once again be the Mauritanian attraction in this CHAN. A player with great qualities, the young 22-year-old striker has impressed since he came of age.  Not spared by injuries in recent months, this will be an opportunity for him to make a redemption. During the qualifiers, Tanji starred for Mauritania and will be hoping to add to the four goals he has for his country in all appearances.

FC Nouadhibou is one of the, if not, the most successful club in Mauritania. The team founded in 1999 has won the Mauritania Ligue 1 ten times, with the last being the 2021-22 Ligue title. The side that boasts a handful of star players in the current Mauritania CHAN squad Coupe du Président de la République.