The TotalEnergies African Nations Championship (CHAN), Algeria 2022 will take place from January 13 to February 4, 2023. Ivory Coast heads into this competition with renewed momentum to do better than their previous editions.

The team had a 1-0 friendly win against Libya on January 3. The next friendly match for Ivory Coast will take place on December 9 against Mauritania and then the team will leave for Algeria on January 10.

Road to the final

The Local Elephants were exempted from the preliminary round of the qualifiers of the 2022 African Nations Championship and joined in the second round with a hard-fought victory over Burkina Faso in the Western Zone B qualifiers with both sides separated only through penalty shootouts. The first leg between Ivory Coast and Burkina Faso took place on 27 August 2022 with a 0-0 score line. This was the same score line during the return leg on 4 September 2022 with the game headed to penalties. Ivory Coast came out with a 5-3 victory and qualified for the Africa Nations Championship “We are in this competition with the intention of writing a new page in Ivorian football,” Soualiho Haïdara, a local-based coach of the Local Elephants said while publishing his list of players to participate in the competition.

An experience coach, Soualiho Haïdarawas in charge of the Ivory Coast U23 side that reached the quarter-finals of the 2020 Olympic Games in Tokyo, Japan. He equally guided Ivory Coast to runners-up finish in the U23 Africa Cup of Nations, losing to hosts Egypt in the final.

A fifth birth for Ivory Coast at CHAN

Ivory Coast will be participating in Algeria for the fifth time in their history, having last participated in 2018. Ivory Coast’s journey at the CHAN began back in 2009 and had featured in the 2011, 2014 and 2016 editions.

The team will be hoping to do better than their 2016 third-place finish, a position that is still their best-placed finished at the competition to date. The team back then defeated Guinea 2-1 to seal their victory. The other previous appearances have seen the side eliminated at the group stages, something they will look to avoid in Algeria. 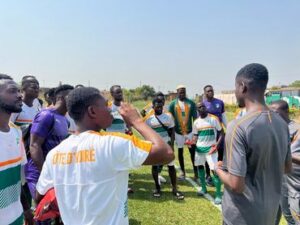 Ivory Coast are in what is anticipated to be a highly competitive Group B with DR Congo, Senegal and Uganda. The Local Elephants will face Senegal in their opening match on January 14, a match that will be a stern early test for Haïdara and his team who are looking to exceed their best ever performance in the competition, a third-place finish at the 2016 edition in Rwanda.

Paĉome Zozoua currently plays for Ivorian giant in ASEC Mimosas. A central midfielder, Zouzoua has scored 6 goals in the Ivorian Ligue 1 with 3 goals in 6 games in the CAF Champions League and Confederation Cup combined. The 25-year-old played in Czech Republic and Latvia before returning home to join Africa Sports and then later to ASEC, CAF reported.

The Association Sportive des Employés de Commerce Mimosas, literally Mimosas Commerce Employees’ Sporting Association or commonly known as ASEC Mimosas is the most successful club in Ivory Coast. Founded in 1948, they are the most successful side in Ivorian football, having won the Ivorian Premier Division 24 times and the 1998 CAF Champions League

In late December the coach named his list of 25 players for the competition with Ivorian champions ASEC Mimosas by far the most represented club. Nearly half of the team are composed of players from the famous African club with eleven players. ASEC midfielder Essis Aka Baudelaire will captain the squad in Algeria with club teammates Aubin Kramo.