Yong Sports Academy of Bamenda has recorded its second win of the season.

The second victory of the season came on the day YOSA’s interim coach Anumewa Franklin was celebrating his birthday. A perfect birthday gift from his players concretized by two second-half goals. 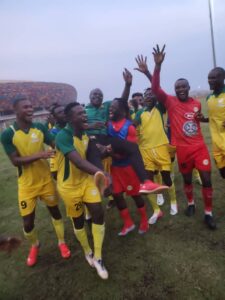 In the first half of the match, Yong Sports Academy of dominated proceedings and controlled the midfield with the brilliance of Nchindo John Bosco and Njibero Durell with Yuninsi Vitalis sitting in front of the defense.

YOSA’s winger Rudolf Koukisang Njongmu found the back of the net less than five minutes into the match from a Nchindo John Bosco corner kick. Surprisingly, the second assistant referee flagged for offside.

The only opportunity in the first half for Fauve Azur fell to Mbappe Muller but his shot was saved by YOSA’s Ekoi Manfred Mekumba.

In the second half, coach Anumewa Franklin brought in Embe Franck Eric to replace Mael Dindjeke.

Embe had an immediate impact as he gave a lot of problems to Moukap Rostand who was at the heart of Fauve Azur’s defense.

YOSA finally took the lead when Fang Englebert took advantage of lackluster defending and delivered a perfect cross to Embe Franck Eric who scored to give YOSA the lead.

With less than a quarter to the end of the match, Nchindo John Bosco delivered a cross that was deflected by Embe Franck Eric. The deflection was a good assist for Njibero Durell who scored with an overhead kick to double the scores for YOSA.

The victory takes YOSA to 8 points as they will play against YAFOOT on Saturday in Mbouda.