The president of FECAFOOT North West on Friday 30th December 2022 had a press briefing with the media to give clarifications on the situation and state works of the Bamenda proximity stadium project.

“I am coming now to explain why we have some delays in the field so that we can understand what is happening.

“You can see that we have done a lot of work already and I will tell you that this is about of the first projects that UNDP is realizing concerning structures or stadiums”, Mbigha Felix said.

Talking about why work has not been completed he noted that the tender had some irregularities at the beginning.

“There were a lot of irregularities in the tenders. So when we awarded the contracts, we noticed and some of the things that were not okay for a football stadium so we had to pause and see how to revisit the studies then re-award the contract. And we took quite some time to do that and we have come to a compromise with the contract”, he said.

The Bamenda Proximity stadium at Ntaafi, Bamendakwe was supposed to be made up of a multi-purpose playground and a G+1 for offices.

He noted that the playground is already ready, and the synthetic turf is already here in Bamenda so we just needed this correction with the UNDP so that the work can continue unperturbed.

He highlighted that after a workshop planned for January 4th and 5th in Bamenda, the three contractors charged with executing the project will give the time to deliver the project.

According to the President of FECAFOOT North West, the best is being done so as was supposed the field is delivered. 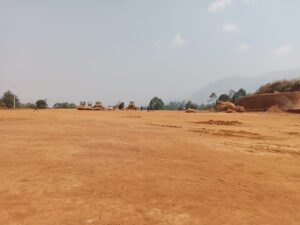 Construction works at the Bamenda Proximity stadium started some three months ago and it was supposed to be delivered by December 31st, 2022.

For the past two seasons, Yong Sports Academy and PWD Social Football Club of Bamenda, elite one clubs in the North West region have not had the luxury of playing their home matches in Bamenda.

Bamenda, the chief town of the North West region cannot boost a single football field worthy of the name.

The stadium woes of the football-loving population of the North West region started in 2016 when Tombi Aroko Sidiki, then president of FECAFOOT started construction works at the Bamenda Municipal stadium. To date, the stadium is a shadow of itself.

In a very weak economy in Bamenda, YOSA and PWD are forced to travel to Mbouda and Bafoussam to play their home matches without the usual support of their fans.