The prolific right footed attacker who masters the rules of Amputee football and an apt goalscoring poacher joint the Turkish side from North West based amputee football club Abakwa Boys AFC and was vice top goalscorer of the league.

Popularly known as “Vishow”, Nkam has penned a mark in the hearts of amputee football lovers in Cameroon as well as written his name in the books If history for the federation. 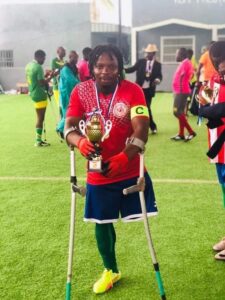 Before leaving Cameroon, Vishow helped Abakwa Boys emerged as champions of the maiden edition of the Amputee Football League 2021 scoring over five goals behind top goal scorer Ndifor Joel, while serving as captain.

He constituted the first ever delegation of amputee football players that went to Angola in 2019 for the African Amputee Football League. He also featured for the 2022 Amputee AFCON in Tanzania though the team failed to qualify for the World Cup staged in Turkey.

He now joins the likes of Françoise, Fon Dieudonne and Mokem Steve who are currently involved in Amputee football out of the country.

All rights reserved. This material and any other digital content on this platform may not be reproduced, published, broadcast, written or distributed in full or in part, without written permission from our management.