A thrilling encounter at the Education City Stadium saw the Black Stars of Ghana pick their first victory in the ongoing FIFA Qatar World Cup and saw the side several records in the process.

Despite Gue-sung Cho’s brace, the Black stars will hold on to a 3-2 victory, and keep their chances alive of at least a quarterfinal having lost their first group game against Portugal.

This is also the most goals scored by any African team currently at the FIFA World Cup after they netted twice against Portugal in the 3-2 defeat against the European powerhouse.

Otto Addo’s side became the second African team in as many games to notch three goals at these finals – after Cameroon earlier became the first to do so since the Ivory Coast vs. North Korea (3-0) at South Africa 2010.

“It was the first time in the history of the FIFA World Cup that a team like Ghana has been able to qualify for the knockout stages of the tournament,” Ghana coach Atto Addo said. “The team has been able to get a good result in the last two years, but it’s not going to be easy.” 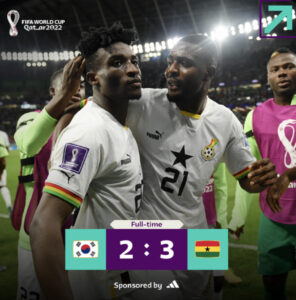 23-year-old Mohammed Salisu entered the record books as the first defender to ever score a World Cup goal for Ghana, after netting against South Korea. The centre-back for Premier League side Southampton gave the Black Stars the lead against the Taegeuk Warriors, smashing in from close range after a Ghanaian set piece was poorly defended by the Asian champions.

Salisu, who has just four appearances for Ghana’s national team, made his debut for the Black Stars in their 3-0 defeat to Brazil in an international friendly on September 23 this year. He will be hoping to keep up this fine performance as the Black Stars look to end their World Cup campaign on a high.

A draw for Ghana against Uruguay (depending on the score between Portugal against Uruguay) may just be enough to see the side into the round of 16.  Ghana faces Uruguay in the final group fixture, while South Korea – who are the third team to have 20+ shots in a match this tournament and lose, after Germany (26 vs. Japan) and Canada (22 vs. Belgium) – take on Portugal.