Often nicknamed “the Moroccan Guardiola,” Walid Regragui is famous for his impeccable sense of humour, and has been named by the International Federation of Football History and Statistics (IFFHS), as the third-best coach of 2022.

Walid finished with 30 points behind Deschamps, and winner Lionel Scaloni. The third place for Walid also saw him enter the history books of the IFFHS. “It is the first time in history that an African coach took a place on the world podium!” read the IFFHS statement.

“People respected us before and maybe they will respect us even more now….,” Walid said in a post-match reaction following his side’s 2-0 loss to France. “We went further than Brazil, Spain, Germany, all top sides, but we have to show that regularly if we want Morocco to be on the world footballing map.”

“We knew we had achieved something great already and that everyone was proud of us. We are pleased with what we have done, but felt we could have gone even further,” Regragui added. 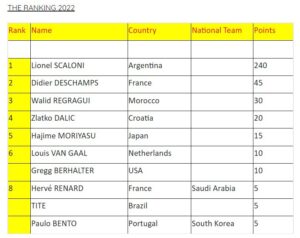 “I told the players I was proud of them, his majesty [King of Morocco, Mohammed VI] is proud, the Moroccan people are proud, the whole world is proud. We worked hard, we were honest, and we showed the values we wanted to show.”

FIFA said: “Unapologetic about his emphasis on being solid in the back, he used his midfield’s relentless energy and his forwards’ flair to soak up pressure and hit opponents on the counter as and when needed.”

It has been a journey so far for Walid who between 2001 and 2009, made 45 appearances with Morocco’s national team. He was part of the team that finished in second place at the 2004 Africa Cup of Nations (AFCON) in Tunisia. He played as a right-back for five French clubs throughout his career. In 2002, he won the Ligue 2 with Ajaccio as a player.

“A lot of Europeans have criticised our style of play but that is because they don’t like to see an African team play cleverly,” he said at a press conference. “They think African teams used to be fun but get knocked out. But those days are over now. There isn’t just one way of winning. Look at France against England, they didn’t create 40 opportunities, they were just effective. I don’t really care about expected goals or possession.”