Qatar2022WC: Yaounde denizens vibrate to the Moroccan rhythm of success

Many Yaounde denizens who turned out to watch long-awaited Morocco versus Spain encounter, at the Yaounde City Council fan zone, succeeded in transforming the viewpoint into an electrifying and sensational amusement place.

Through funny reactions following the 3-0 victory of the Atlas Lions against Spain, at the Education City Stadium on Tuesday, December 6, 2022.

After both sides had played a 0-0 tie for about 90 minutes and extra time. Most of the Cameroonian fans who were in support of Morocco were so worried about the faith of their team. 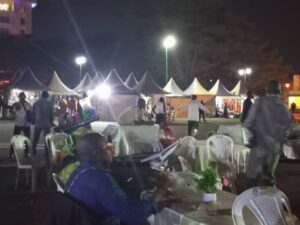 Jean Marie said; ” This Moroccan team should not put shame on us, Papa God eeeeh. See how they are just missing chances, as if they don’t know that our hopes are on them”.He said

When Achraf Hakimi walked towards the ball, took a deep breath out, took a measured run, and went for the middle. Boom Goal!

Usman reacted; ” l knew it was going to be a goal, he’s a great player and needs not to be tampered with.” He said

When Morocco’s Yassine Bounou made three crucial saves in the penalty shootout against Spain in the FIFA World Cup Qatar 2022 round of 16 matches, at the Education City Stadium, it was ecstasy for the fans who chanted songs for praises in favor of the Atlas lions. While requesting on the waitress to offer more bottles of “Manyang and kadji beer.”

47-year-old Walid Regragui who took the Moroccan national male football team on August 330, 2022 has made a groundbreaking record to become the first ever African coach to qualify for a World Cup quarter-finals spot.

All rights reserved. This material and any other digital content on this platform may not be reproduced, published, broadcasted, written in full or in parts, without a written permission from our management.