The Teranga Lions of Senegal have defeated host Qatar 1#3 in their second Group A match at the 2022 World Cup, becoming the first African side to win a game in the tournament.

The Teranga Lions lost their first match to The Netherlands but bounced back Friday to revive their qualification hopes.

Goals from Boulaye Dia, Famara Diedhiou, and Bamba Dieng were enough to beat the host nation Qatar, who will be eliminated if Group A leaders Netherlands avoid defeat against Ecuador.

The defeat left bottom side and host nation Qatar sweating on results elsewhere if they are to avoid following South Africa in 2010 as only the second World Cup hosts to bow out after the first round.

Qatar had made a nervy start to the tournament in a 2-0 defeat to Ecuador and they got beaten again by African champions Senegal. 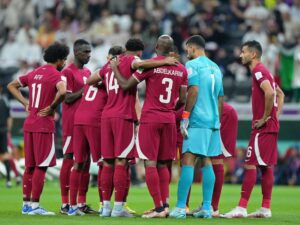 The Asian champions dropped their goalkeeper Saad Al Sheeb to the bench after his shaky performance in the opener.

His replacement Meshaal Barsham did not inspire much confidence in the early stages, flapping at a corner as Senegal pushed for the opening goal.

Ismaila Sarr and Nampalys Mendy had already missed scoring chances for Senegal by then, and Idrissa Gana Gueye and Youssouf Sabaly squandered more as the first half went on.

The lone goal for Qatar which turned out to be a consolation was scored by Muntari.