The last hope for the Africans at the FIFA Qatar World Cup rests on the Moroccans. Coming off a historic win against Belgium and Canada, the Atlas Lions will look to shut down another European powerhouse in Spain, two countries separated by just 13 kilometres, across the narrowest point in the Mediterranean Sea.

The Atlas Lions and La Roja will be meeting each other for the fourth time at the Education City Stadium, at 6 pm (4 pm GMT+1). Making its sixth appearance at the World Cup, Morocco will look to qualify for the quarterfinals for the first time. It is also only the second time they have reached the round of 16 with the last coming back in 1986. 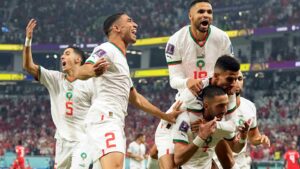 The last meeting between Morocco and Spain came back at the 2018 FIFA Russia World Cup with both sides separating on a 2-2 draw. Before that, both sides had won one game each against the other.

Morocco’s goalkeeper, Yassine Bounou, said the team had already “made history” by reaching the last 16 but said it wanted to achieve “more” yet. “Spain will force us to be at our best,” Bounou told reporters on Sunday.

“[But] we are thoroughly prepared. We have got better and better with each passing game, and I’m sure we’ll be in good shape,” he added. “We want to make our people happy.”

Morocco is unbeaten in their last four matches at the World Cup (W2 D2). The only African team to go five consecutive World Cup games without defeat are Cameroon (W2 D3 between 1982 and 1990).

Since winning the 2010 FIFA World Cup, Spain has struggled to get back to its glory days, failing to reach the quarterfinal in the last two editions. In 2014, Spain failed to leave the group stages while at the 2018 World Cup in Russia, the side was beaten in the round of 16. 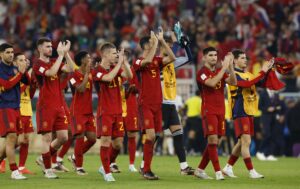 “Now a new competition is beginning. There is always analysis on what we can improve on, even after the games when we’ve played well,” Rodri told reporters ahead of Tuesday’s game

“They have very good quality players and they work very well in a collective way, it will be a very tough and very even match. They knocked out Belgium. We should have a good day to beat them,” he said.

“(Ziyech) is a great player, he’s playing very well… Very dangerous when he shoots. But I think Morocco has great players, not just Ziyech.”