The Cameroon Women’s top tier championship dubbed the Guinness Super League, was in match day three action over the weekend.

Four out of the six games were played, with just five goals scored, the lowest scoring match day since the start of the season.

Multiple league winners Louves Minproff outsmarted Caïman of Douala 1#0 on Saturday at the Annex A of the Olembe stadium. Adrienne Mekuko netted the lone goal of the game at the 67 minute, to hand Louves their second win of the season.

Anong Bernadette’s Louve Minproff have now gone three games unbeaten (two wins and one draw). For Caïman of Douala, it has been a dismal start of season, as they have loss all their three games.

Authentic FC of Douala went top of the league for the first time, following their 3#0 bashing of Amazone FAP. AndreNgoBillong, Nicole Tchoudja and Audrey Mbondjo were on target for Authentic FC, who have had a scintillating start to the season.

Prior to Saturday’s win, Hernadez Fagnia’s side had defeated Ebolowa FC in their first game, and recorded a zero all draw against Louves Minproff in Yaounde on game week two.

Considered as one of the best teams in the Cameroon women’s league, Amazone FAP is currently in their worst start of the season ever.

Mike Ndoumou’s side has suffered three straight defeats, a record low for the club in the Cameroon women’s first Division. After defeat to Louves Minproff on game week one, FAP crumbled to FC Ebolowa on game week two, before their recent 3#0 defeat away to Authentic FC.

“The others had more desire and they maximized the chances they had. It’s not like we haven’t had chances, we’ve had chances that we haven’t concretize. The opponent had some, they took their chance and scored. The championship has only just begun. It’s the 3rd day, we have 11matches in the first round and 11 in the second phase, that’s 22 matches. If we take away three matches, I think there is still a lot to do,” Mike Ndoumou told reporters after the game.

Nothing to seperate Eclair and FC Ebolowa

Éclair FC of Sa’a and FC Ebolowa played a zero all tie in the top match of game week three, that took place at the Annex A of the Olembe stadium on Saturday. Both sides came to the game after recording wins on match day two, but the thrilling game at the Olembe Annex stadium failed to produce any goals.

Éclair FC’s Ngo Boum Georgette was named woman of the match in that fixture.

It was a long sweet journey for Eding Sport of Lekie, who recorded a 1#0 win over league’s new babies Ngadeu FF at the Ndoumbe Oumar stadium in Ngoundere on Sunday.

Anne Ngono scored the lone goal of the game to secure the first three points of the season for Eding. It was actually their first game of the season, after their two previous games against Canon FF and AS AWA FF did not hold.

The other two games counting for game week three were postponed. AS AWA FF versus AS Fortuna and Lekie FF versus Canon FF games, will now be programmed on a yet to be announced date.

Canon FF and their Wahala’s

Canon FF of Yaounde is the only team yet to play a game this season. After officials of the club reportedly showed up with two different teams on match day one Eding, both factions of the club are seemingly still to sort out their internal squabbles.

Canon FF has therefore not featured in their games against Eding Sport, Ngadeu FF and most recently against Lekie FF.

What the table says

Authentic FC and Louves Minpproff are currently top of the league’s rankings with seven points each, with just goal difference separating them.

On the other hand, Caiman of Douala, Amazone FAP, Ngadeu FF and Canon FF are yet to record a point this campaign. 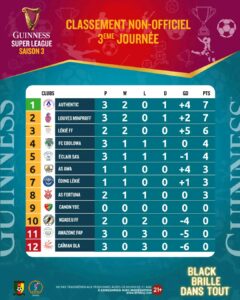 It should be noted all the players with two or more goals are yet to play their game week three matches.