Uganda recorded their first win at the CHAN since 2014. Photo: CAFONLINE

The Cranes of Uganda are a step closer to a historic quarter final spot at the ongoing African Nations Championship in Algeria, following their 1#0 over Senegal at the 19 May 1956 Stadium in Annaba, on Wednesday night.

Captain Milton Karisa scored the lone goal of the game at the 33rd minute, as the Cranes recorded their first win in the competition since 2014.

Senegal who were reduced to 10_men in the later parts of the game, following Ngom Laye’s red card, missed their second consecutive penalty. Goalkeeper Nafian Aloinzi, was the hero from the six yards box when he saved Cheikh Sidibe’s spot kick.

Uganda has not gone passed the group stage in their last five participations at the CHAN, but currently tops group B with four points. The win on Wednesday was also the first, since their 2#1 win over Burkina Faso in the 2014 edition of the competition in South Africa.

Milutin Sredojević and his boys will next play bottom placed Ivory Coast on Sunday January 22, at the Nelson Mandela Stadium. A draw in that game will be enough to see Uganda reach their first ever quarter finals at the CHAN. 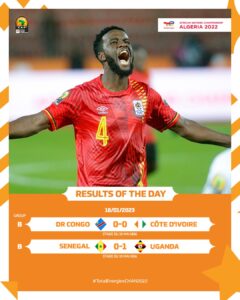 “I believe that we succeeded in our plans. We are not over the moon. It is for our players and people back at home to celebrate because Uganda doesn’t beat Senegal everyday. However, we focus our attention on the next game against Cote D’Ivoire. I have deleted this match from my mind,” Micho said after the game.

DR Congo facing a must win

The Leopards of DR Congo, were held to a goalless draw by Ivory Coast. Despite been reduced to 10 men following Zoungrana’s red card, Ivory Coast stayed solid and took a point home.

Two times winners DR Congo, has now recorded just two points from two games, and will have to must win second placed Senegal on Sunday in their last group game.

Other possible Scenarios in Group B

It is still all open for all the teams in group B. Like Ivory Coast coach Souailo Haidara said, “We are not out of the competition. We will go into the third game targeting qualification. I still believe in my team,” it is still possible for any of the four teams to sail through. 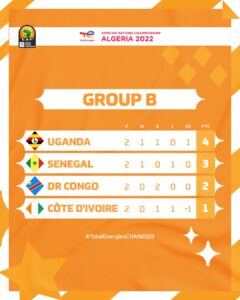 In case the Elephants beat Uganda and Sunday with a good margin, and Should Senegal beat DR Congo, the Teranga lions and Ivory coast will go through.

A draw against DR Congo can also be enough for Pape Thiaw’s Senegal to go through, in case Uganda picks at least a point against Ivory coast.

What is on scheduled today?

This Thursday is the turn of Group C to get into action. With Morocco haven pulled out of the competition, it means only one game will be staged at the Mohamed-Hamlaoui stadium in Casablanca. 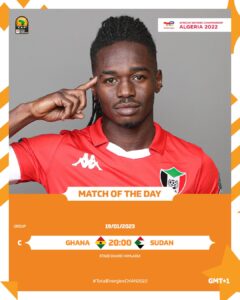 The black Galaxies will host Sudan, with both sides looking for their first points in this competition. Morocco did not show up for their game against Sudan, meanwhile Ghana was stunned 2#1 by Competition’s debutants, Madagascar.

Madagascar who tops Group C with three points, will be exempted from match day two.

Group D and E will be in action on Friday in Oran, when Angola takes on Mauritania at 17h00 GMT, while Congo Brazzaville will host Niger at 20h00 GMT.

Mali and Cameroon will be on standby in group D and E respectively.