The local Teranga lions of Senegal, have recorded the lone win in the second day of action at the 2022 African Nations championship in Algeria. Ethiopia, and DR Congo, were held to goalless draws in the other two games played on Saturday.

Ndiaye wins it for the Lions

Moussa Ndiaye made the difference at the 19 May 1956 Stadium on Saturday evening. Senegal dominated the entire first segment of the game, but failed beat goalkeeper Ayayi Folly.

Pape Thiaw’s second half substitution paid off, when Moussa Ndiaye came off the bench and scored the lone goal of the game. Camara’s 77th minute free kick riffled the woodworks, but Moussa Ndiaye was well positioned to slot in the rebound. 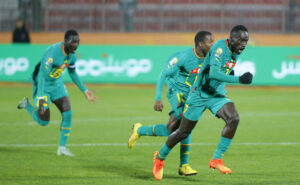 The goal proved vital, as Senegal held tight to secure all three points, which propel them to the top of Group B, with three points.

In the first game at the at the 19 May 1956 Stadium, two times winners the Democratic Republic of Congo, failed to find a pass the cranes of Uganda.

Milutin Sredojević’s cranes stayed compact at the back to stop all offensive from the leopards, and attempted counter attacking moves Wich however yielded no fruits.

Congo’s Jean-Marc Makusu came close to breaking the deadluck just minutes after coming on in the second half, but his efforts hit the side netting.

DR Congo and Uganda now have a point each, and sit behind Group B leaders, Senegal.

In a Group A game played earlier on, the Walia Ibex of Ethiopia were held to a goalless draw by the Mambas of Mozambique.

A dominant Ethiopia ran short of ideas in front of goal, with Fuad Abdo, and Markine Maleko, culpable of squandering big chances.

On the other hand, goalkeeper Victor Guambe of Mozambique, played a decisive role, in his side taking a point away from the Nelson Mandela Stadium.

Round one of matches will continue on Sunday in Group C, with defending champions Morocco taking on Sudan, while Madagascar host the Black Galaxies of Ghana.