The Intermediate Indomitable Lions of Cameroon will participate in their fifth tournament at the African Nations championship, CHAN 2022 when the 7th edition of Africa’s second nations pinnacle event runs from January 13 to February 4, 2023 in Algeria.

How they got here

Unarguably the most successful football nation in central Africa, Cameroon eliminated Equatorial Guinea to reach the finals of the tournament.

Waved bye in the first round of the qualification process, Cameroon only entered the race in round two. Up against Equatorial Guinea in Malabo, they couldn’t breakdown the local Nzalang Nacional. Yves Alain Dooh Moukoko and mates returned to Garoua two weeks later, in another August meeting and found out their neighbors.

Goals from Marou Souaibou and Kaiba Djawal of Cotonsport were enough to shrug off the gritty Guineans. The win and qualification meant the Lions took a fifth CHAN rendezvous in seven.

Che Malone Fondoh Junior and 20 potential tournament debutants will be in Algeria to defend the colors of the famous nation. The newcomers will be counting on the experience of CHAN 2018 duo Etta Bawak Thomas and Martial Zemba Ikoung plus Valentine Beo Batto who featured in the last edition held in Cameroon in 2021.

This category of Cameroon’s national squad is nicknamed the intermediate Indomitable Lions, but many usually leave out the Indomitable in part of it. It is for players plying their trade in the domestic championship.

It is the category of the national team just before the senior team. They are still running after their first trophy.

For the fifth tournament running, Cameroon will bring a new lead trainer to the CHAN.
After Ndoumbe Bosso in 2011, Martin Ntoungou Mpile in 2016 and 2021, plus Rigobert Song in 2018, ex-international Alioum Saidou will make his competition debut in Algeria.

The 44-year-old who grew who began his journey in the game some 24 years ago at Cotonsport of Garoua enjoyed a successful 12 years football career through the ranks of clubs in Cameroon, France and Turkey.

Fast track to 2011, Alioum who started all three games for Cameroon at the 2006 Africa Cup of Nations tournament in Egypt and won 17 caps for the five times continental champions decided to retire from the green tough. The former FC Nantes and Galatasaray midfield maestro wasn’t away for long, the Sivasspor cult hero quickly returned to his hobby as a youth team coach at Turkish side Kayserispor.

Within few years, Alioum earned promotion to higher categories of the Kayserispor feeder teams. Echoes of his strides became louder back at home.

As the president Samuel Eto’o Fils reforms entered application to top gear, another ex-international and team mate of his received a national call.

The Eto’o led FECAFOOT executive was calling… Yes Eto’o, Yes, it was Cameroon calling. One of those calls anybody will take without thinking twice.

On the night of a faithful August 24th the nation was given the desired change from Martin Ntoungou who guided Cameroon to a fourth place finish in 2021 to Alioum Saidou.

Alioum arrived as an unknown quantity in the aspect of the national team coaching job. However, the former Kayserispor holding midfielder knows this is a lay off around the box from Eto’o, like it use to happen during AFCON 2006. Can Alioum hit the target from this position? Only time will tell.

So far, the man mentored by ex Lions coach Arthur Jorge has led the team in two games and remains won one while the other ended on a parity score.

Number of appearances and Results

In the previous four editions, Cameroon reached the quarter-final on two occasions – 2011 in Sudan with Bosso as coach and 2016 under Mpile who returned in 2020 to inspire his nation to a fourth place finish on home soil.

Cameroon’s only failure to get out of the group stage was in 2018 in Morocco when a Rigobert Song inspired side turned up looking totally far from inspirational.

2011 was the best group stages performance ever. Cameroon exited the tournament after post-match penalties defeat against Angola. But remarkably the team didn’t concede in 647 minutes of operation.

In all Cameroon have recorded wins in 7 CHAN games, draw in 6 and lost four. They have scored 14 and conceded 12 goals in the tournament keeping nine clean sheets in that time.

This time around, CAF added the number of participants to 18 nations and provided for groups of three teams. Cameroon happens to be in one of those three nations groups.

Kaiba Djawal and mates have the local Menas of Niger and neighbors neighbors Congo Republic as group E opponents. Congo confronted Cameroon in the 2018 edition and recorded a 1-0 win. That particular clash will be the only deja vu in the group.

The Intermediate Lions who will based in Oran will enter the competition on January 16 against Congo Republic. They will complete their group matches against the Niger Republic eight days later.

To date Cameroon’s best result in the tournament was finishing fourth in the last edition on home soil.

Banga Salomon Bidjeme Bienvenu and Yazid Atouba are Cameroon’s all time top scorers in the competition with two goals each. Yazid was the star in 2016 in Rwanda while Banga skippered and scored in the previous edition.

Cotonsport defender Che Malone Fondoh Junior is expected to sparkle during the tournament. The 23-year-old who has taken the local championship by storm in the past 12 months is fresh into international football, but very commanding.

Last year Che and not fancied club colleague Goni Ali became the first center-back pairing to win the cup of Cameroon without conceding. The former Union Sportive of Douala defender played every minute of the qualifiers against Equatorial Guinea and followed that up with his senior international debut against Jamaica last November.

The strong sweeper will with exceptional ability to play out from the back and ditch long range passes is expected to be Cameroon’s poster boy at the tournament.

World Cup instant hero Jerome Ngom Mbeleki who came on against Brazil and made nonsense of the presence of Eder Militao of Real Madrid and former Barcelona defender Dani Alves is expected to catch the cameras during the tournament. The silky wing-back was one of two Cameroon based players at last month FIFA World Cup in Qatar.

In an era where the forwards dominate the headlines, great contributors to team success operating out of the goal scorer role get very little attention. This is exactly the situation with Cotonsport midfielder Kaiba Djawal. 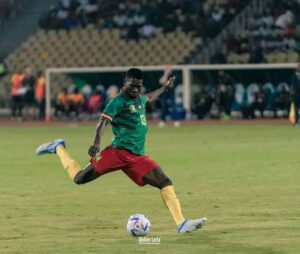 Kaiba Djawal played 32 games in all competitions and scored seven goals in Cotonsport’s journey to another domestic double.

This club performance earned him call ups to the Under-20, Under-23, Senior and intermediate Lions team.

Having scored for the intermediate Lions Lions against Equatorial Guinea, U-23s against Angola, U-20 against Congo Republic, Kaiba scored the equalizer for the Indomitable Lions against Jamaica – becoming the first player in the World to score for four different national teams in a single calendar year.

The strong sweeper who is endowed with exceptional ability to play out from the back and ditch long range passes is expected to be Cameroon’s poster boy at the tournament.

World Cup instant hero Jerome Ngom Mbeleki who came on against Brazil and made nonsense of the presence of Militao and Dani Alves is expected to catch the cameras during the tournament. The silky wing wizard was one of two Cameroon based players at last month FIFA World Cup in Qatar.

In over 60 years of domestic football, 11 clubs have won the flagship championship. Of all, Cotonsport who are less than 40 years into existence are the most successful club. Though they are yet to experience continental triumph, the Garoua giants have won 17 domestic titles, including successes in the past two seasons.

The franchise created in 1986 faces competition from struggling Canon Yaounde,PWD of Bamenda and Union Sportive of Douala amongst other emerging clubs like UMS and Eding Sport de la Lekie, but remain steadfast.

They won the domestic double last term. On the continental scene, they have played the final of the CAF Champions League and Confederation Cup in 2008 and 2003 respectively.

Cotonsport are arguably one of the best in central Africa and can boast of eight players in Cameroon’s CHAN 2022 squad.