Sadio Mane was Bayern’s marquee signing over the summer – and the Senegalese star has certainly made his mark. He prefers operating from the wing, however, and Choupo-Moting has become a key player through the middle with 11 goals in all competitions by the mid-season break.

Julian Nagelsmann has found that playing with a more orthodox No. 9 has suited his side of late, and 33-year-old Choupo-Moting – signed in case the indefatigable Lewandowski ever needed a breather – has seized the day.
Choupo-Moting was born in Germany, and represented his native nation up to and including U21 level. With a German mother and a father from Cameroon, however, he had two countries to root for – and to play for.

The former Paris Saint-Germain and Stoke City striker made his senior debut for Cameroon ahead of the 2010 FIFA World Cup, and he would feature for the Cameroon team at both that tournament and the 2014 edition.
“My mentality is at least as much Cameroonian [as it is German],” he has said of his decision.

Cameroon didn’t make the 2018 World Cup but the Bayern forward helped them qualify for this year’s event. Choupo-Moting was on target in their dramatic 2-1 extra-time victory over Algeria in a play-off in March and he has been included in Cameroon’s final squad for the tournament. 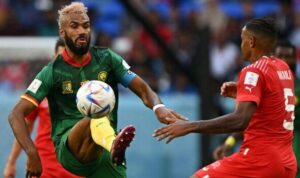 Choupo-Moting’s journey to the very top level took a bit longer. After representing local clubs Altona 93, St. Pauli and Hamburg at youth level, he made his Bundesliga debut with the latter – aged 18 – on the opening day of the 2007/08 season.

After that, though, the 1m91 frontman played with Nuremberg, Mainz, Schalke and Stoke before moving to PSG and famously starring for them at a crucial stage in the Champions League. Now, of course, he’s doing likewise at Bayern – only this time as a more regular starter.
“Whenever I play – whenever I have the chance to be on the pitch – I give 100 percent,” he once said. “I just want to show my qualities.”

Bayern coach Nagelsmann has said that Choupo-Moting’s performances have made him an indispensable starter.
With his double against Hertha on Matchday 13 in the German Bundesliga, after all, the veteran forward stretched his scoring streak to seven consecutive games across all competitions (and nine goals during that run). That was something only previously achieved at the club by greats such as Lewandowski and Gerd Müller.
“I know what I can do and I know I can help the team with my qualities,” Choupo-Moting said after scoring with a thunderous strike in Bayern’s UEFA Champions League win over Inter Milan at the start of November.

What the stats say

Cameroon’s final World Cup preparations took place on Friday with a friendly against Panama in Abu Dhabi.
Eric Maxim Choupo-Moting was sat on the substitutes bench until half-time. Within two minutes of the second half starting and Choupo-Moting coming on for Vincent Aboubakar, he had opened the scoring. He picked up a loose ball and scored at the second attempt from just inside the penalty area.

Aboubakar is Cameroon’s captain and talisman — he is expected to lead the line at the World Cup and has started five of their six games since Song’s appointment in February. Yet as a second striker in a deeper role or as a partner, Choupo-Moting could yet prove the most influential player at his head coach’s disposal.

In the race to play in Cameroon’s opening game of the tournament on Thursday, a Group G clash with Switzerland, Choupo-Moting has done his bit.
The 33-year-old striker had also continued the theme he has carried in recent weeks, if not much further back.
First, Choupo-Moting is in the form of his life with Bundesliga leaders Bayern Munich.

He has scored 11 goals and registered three assists in 12 games since the start of October, working out at a goal involvement every 56 minutes. His form goes beyond impressive — it has made him an outlier compared to those operating in Europe’s top five leagues (the Bundesliga, Premier League, Ligue 1, La Liga and Serie A) — even compared to Manchester City phenomenon Erling Haaland. 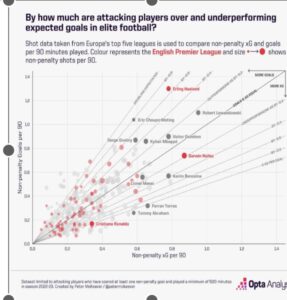 To hammer home Choupo-Moting’s effectiveness in a Bayern shirt in 2022-23, he ranks fourth in Europe’s top five leagues when it comes to goals plus assists per 90, ahead of Lionel Messi and his club team-mates Jamal Musiala and Serge Gnabry. 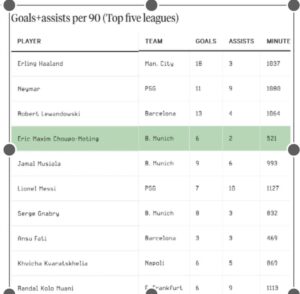 Such a prolific spell would make an intriguing World Cup subplot for any in-form striker heading into a major tournament – If you have seen any of his goals this season, you will recognise that his finishing is at a ridiculously accurate and ruthless level this year. The 33-year-old is currently sitting at a 0.32 shot conversion rate. This places him in the 99th percentile amongst fellow strikers in Europe, and 0.05 above Erling Haaland.

Choupo-Moting’s clinical finishing is further highlighted by the 9 goals scored in the Bundesliga and Champions League coming from a 4.5 xG. He is literally scoring twice as many as he should be – he is simply at a world-class moment in his career.

His influence on the game does not only come from his lethal right foot. Choupo-Moting affects successful build-up play 0.54 times per game (goal-creating action), placing him in the 96th percentile. Alongside 1.52 key passes per 90 minutes, the striker enjoys being involved in his team’s dominant attacking performances.

If you thought Choupo-Moting was simply a bullyish, physical, goal-poaching target man, then the striker has proven you wrong. The 1m91 man completes 1.52 dribbles per game, putting him into 87th percentile – unpredictable, direct, and dynamic.

His work-rate must be admired too. Intrinsic to Cameroon’s philosophies, Choupo-Moting defends from the front. Averaging 1.16 successful tackles per 90, the no. 9 is one of the elite centre forwards in Europe in terms of pressurising the opposition defence (99th percentile).

At 33 years of age, the centre forward has seemingly become a late bloomer in terms of prolificacy in front of goal. He has scored 11 goals in 16 matches for Munich this season.

At PSG and Bayern, his honours have included the domestic French treble, two Bundesliga titles in Germany and the 2020 Club World Cup. He also came on as a substitute in the 2020 Champions League final.

But his success has not just been what he has done on the pitch. Having fulfilled a squad-supporting role in previous seasons, Choupo-Moting is scoring typical No 9 goals with close finishes, headers, rebounds and one-v-ones — the sort of chances they were missing as a team in the immediate absence of Lewandowski.

But, having started his career as a winger, Choupo-Moting is also bringing some of those more dynamic elements to his and Bayern’s forward play in recent weeks. All of it has come with an impressive work rate. The result is a new hero emerging from familiar surroundings.

The time is now for Choupo-Moting
Even for their opening game at the World Cup, Switzerland against Cameroon has the look of a must-win opportunity in a tough group.

With talent-packed Brazil and robust Serbia also in Group G, taking three points in the early afternoon heat on Thursday shapes as a key step for each team to advance.

The task is harder for Cameroon based on recent World Cup form after being swept aside in three straight losses at each of its past two appearances, in 2014 and 2010.

In that period the Indomitable Lions have scored fewer goals collectively as a team on football’s biggest stage than a single Swiss player, Xherdan Shaqiri.
At age 33, Cameroon’s star forward Eric Maxim Choupo-Moting arrives at his third edition in prolific form at Bayern Munich and looking for his first career World Cup goal.

Both Cameroon and Switzerland come to Qatar with solid results at their continental championships in the past 18 months though each now with different coaches.

Murat Yakin, a 49-times capped central defender, was hired from coaching a Swiss second-tier club. He immediately impressed by steering the team to finish top of a World Cup qualifying group ahead of European champion Italy.
Samuel Eto’o, Cameroon’s greatest player and now its federation president, turned to his long-time former teammate Rigobert Song who had a patchy record of results coaching within the national teams’ setup.

Song was the captain and Eto’o scored the only goal when Cameroon last won a World Cup game, 20 years ago in Japan against Saudi Arabia.
It is overdue for Africa’s first World Cup quarterfinalist, in 1990, to rediscover winning form.

Song will have his own question marks to deal with in areas of his World Cup team but he does at least have someone with the form and big-game experience that could yet make for a fun few weeks.
Choupo-Moting has found the goalscoring form of his life but in truth, his character and physicality have never been in question.
Even if he is made to wait from the start, the striker stands on the perfect platform to make an impact on the biggest stage of all.

It would represent another remarkable chapter for one of Cameroon’s genuinely indomitable lions. Though largely used as a squad player, he has often shown glimpses of quality in big moments and it is no coincidence that he has been part of two of the best teams in Europe in the last few years.